Info
Alpha Coders 1 Wallpapers 4 Art 18 Images
Interact with the Movie: Favorite I've watched this I own this Want to Watch Want to buy
Movie Info
Synopsis: Conan is commissioned by the evil queen Taramis to safely escort a teen princess and her powerful bodyguard to a far away castle to retrieve the magic Horn of Dagon. Unknown to Conan, the queen plans to sacrifice the princess when she returns and inherit her kingdom after the bodyguard kills Conan. The queen's plans fail to take into consideration Conan's strength and cunning and the abilities of his sidekicks: the eccentric wizard Akiro, the wild woman Zula, and the inept Malak. Together the hero and his allies must defeat both mortal and supernatural foes in this voyage to sword-and-sorcery land.


Tagline: The most powerful legend of all is back in a new adventure.

View the Full Cast of Conan the Destroyer 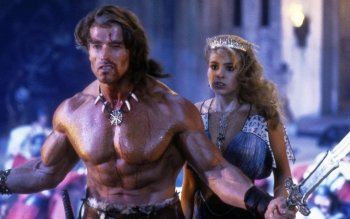 Dragonslayer
Ator, the Fighting Eagle
The Warrior and the Sorceress
Lord Protector
Conquest

The Black Cauldron
Legend of Crystania: The Motion Picture

The Magic Sword
The Blade Master