Info
1 Wallpapers 10 Images
Interact with the Movie: Favorite I've watched this I own this Want to Watch Want to buy
Movie Info
Synopsis: The picture opens in Krasnoyarsk, Siberia, in late 1988, when military trainees Petrovsky, Ryaba, Chugun, Stas, Pinochet, Lyutev and Vorobyev are whipped into shape at a training camp by the brutal, sadistic commander, Warrant Officer Dygalo - prior to being sent off to the front lines. After several one-by-one dalliances with the local whore, Snow White, and a cautionary lecture on the history, geography and culture of Afghanistan (which most of the men sleep through), the trainees head off to battle - first to the Bagram air base, then to the Afghani province of Khost to secure supply lines. But nothing can begin to prepare them for the brutal devastation into which they are plunged, or the relentless tide of slaughter that scatters thousands of Soviet victims in its wake.


Tagline: They stood together while their country fell apart 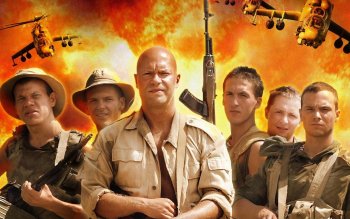 By the Will of Chingis Khan