Movie Abyss It! The Terror from Beyond Space 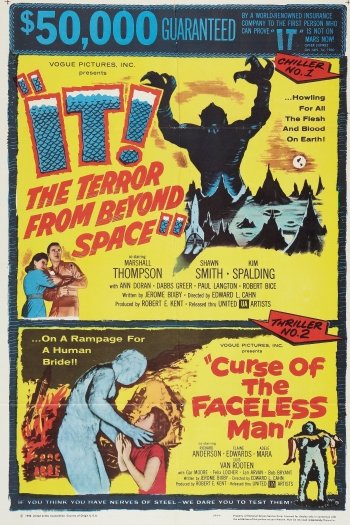 It! The Terror from Beyond Space

Info
Alpha Coders 1 Images
Interact with the Movie: Favorite I've watched this I own this Want to Watch Want to buy
Movie Info
Synopsis: In 1973, the first manned expedition to Mars is marooned; by the time a rescue mission arrives, there is only one survivor: the leader, Col. Edward Carruthers, who appears to have murdered the others! According to Carruthers, an unknown life form killed his comrades during a sandstorm. But the skeptical rescuers little suspect that "it" has stowed away for the voyage back to Earth...

Not of This Earth
The Lady And The Monster
The Mole People
The Being
Mesa of Lost Women
Frankenstein '80
The Terror Within
Mars Needs Women
Invasion of the Pod People
Rage
Camel Spiders
The Diabolical Dr. Z