The Greatest Game Ever Played

Info
1 Wallpapers 5 Images
Interact with the Movie: Favorite I've watched this I own this Want to Watch Want to buy
Movie Info
Synopsis: The Greatest Game Ever Played is a 2005 biographical sports film based on the life of 20 year old Francis Ouimet who defeated his idol,1900 US Open Champion, Harry Vardon. The film is directed by Bill Paxton; Shia LaBeouf plays the role of Ouimet. It is distributed by Walt Disney Studios. The film' screenplay was adapted by Mark Frost from his book, The Greatest Game Ever Played: Harry Vardon, Francis Ouimet, and the Birth of Modern Golf. It was shot in Montreal, Quebec.The film opened at #9 at the U.S. box office in its opening weekend grossing US$3,657,322.Set in 1913, the film is about golfer Francis Ouimet (Shia LaBeouf), an amateur who was expected to fare poorly at the 1913 U.S. Open, and who was supposedly incapable of competing against professionals.


Tagline: Based on a True Story 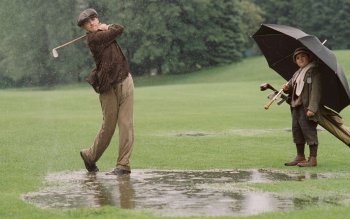