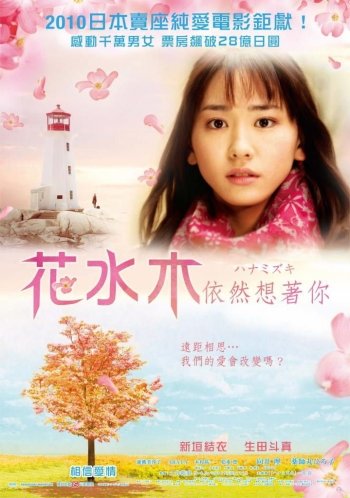 Info
1 Images
Interact with the Movie: Favorite I've watched this I own this Want to Watch Want to buy
Movie Info
Synopsis: Sae (Yui Aragaki) is a high school student who is studying hard for her college entrance exams. She lost her father when she was very young and so lives with her mother Ryoko (Hiroko Yakushimaru) in Hokkaido, Japan. Her father Kemimichi (Arata) once planted a dogwood tree in their garden after he found out he had a terminal disease and could not watch Sae grow up. She hopes to enter a university in Tokyo. She then meets Kouhei (Toma Ikuta), who attends a specialized high school teaching fishery. He hopes to follow in the footsteps of his father and grandfather as a fisherman. These two young people meet and have a long distance relationship. Although their love is strong it does not last. 10 years later these two people have a miracle ...