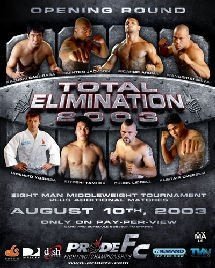 Info
Alpha Coders 1 Images
Interact with the Movie: Favorite I've watched this I own this Want to Watch Want to buy
Movie Info
Synopsis: PRIDE Total Elimination 2003 was a mixed martial arts event held by PRIDE Fighting Championships. It took place at the Saitama Super Arena in Saitama, Japan on August 10, 2003. This event was host to the quarterfinals of the 2003 PRIDE Middleweight Grand Prix tournament. The four winners in the quarterfinals advanced to the PRIDE Final Conflict 2003 event in November.