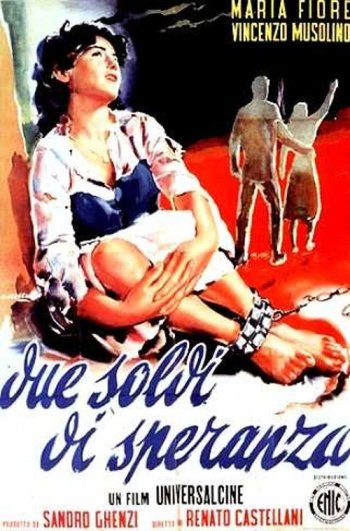 Two Cents Worth of Hope

Interact with the Movie: Favorite I've watched this I own this Want to Watch Want to buy
Movie Info
Synopsis: The film is the third in director Castellani's "young love" trilogy (the first two being Sotto il sole di Roma (1948) and È primavera...(1950)). The story concerns the romance between Carmela (Fiore) and Antonio (Musolino). The ardor is one-sided at first, but Carmela is a determined young woman, willing to scale and conquer any obstacle in pursuing her heart's desire. Once he's "hooked," Antonio scurries from job to job to prove his financial viability. Faced with the hostility of their parents, Carmela and Antonio symbolically shed themselves of all responsibilities to others in a climactic act of stark-naked bravado.

Love is the Only Answer