Movie Abyss On Our Merry Way 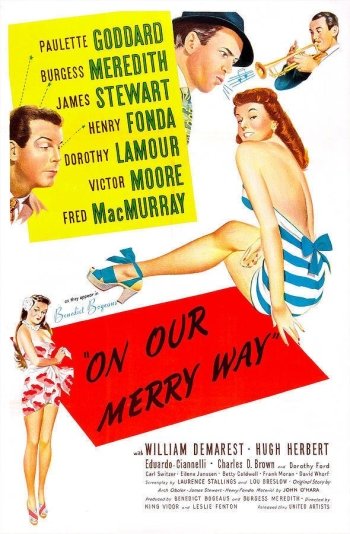 On Our Merry Way

Interact with the Movie: Favorite I've watched this I own this Want to Watch Want to buy
Movie Info
Synopsis: Oliver Pease gets a dose of courage from his wife Martha and tricks the editor of the paper (where he writes lost pet notices) into assigning him the day's roving question. Martha suggests, "Has a little child ever changed your life?" Oliver gets answers from two slow-talking musicians, an actress whose roles usually feature a sarong, and an itinerant cardsharp. In each case the "little child" is hardly innocent: in the first, a local auto mechanic's "baby" turns out to be fully developed as a woman and a musician; in the second, a spoiled child star learns kindness; in the third, the family of a lost brat doesn't want him returned. And Oliver, what becomes of him?


Tagline: She's the queen of a Hollywood tong - and a queen, friends, can do nothing wrong! Her public she serves By displaying those curves..She's a miracle in a sarong!