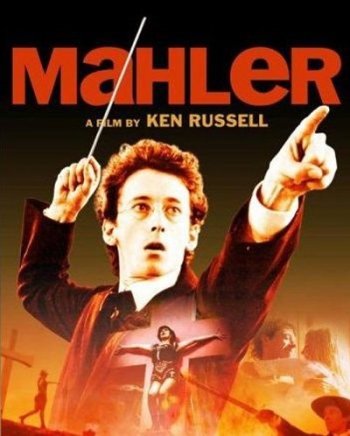 Interact with the Movie: Favorite I've watched this I own this Want to Watch Want to buy
Movie Info
Synopsis: The film begins on a train journey with Gustav Mahler (Robert Powell) and his wife Alma (Georgina Hale) confronting their failing marriage. The story is then recounted in a series of flashbacks (some of which are surrealistic and nightmarish), taking one through Mahler's childhood, his brother's suicide, his experience with anti-semitism, his conversion from Judaism to Catholicism, his marital problems, and the death of his young daughter. The film also contains a surreal fantasy sequence involving the anti-Semitic Cosima Wagner (Antonia Ellis), widow of Richard Wagner, whose objections to his taking control of the Court Opera were supposedly removed by his conversion to Catholicism. In the process, the film explores Mahler's music and its relationship to his life.