Movie Abyss The Woman in Red 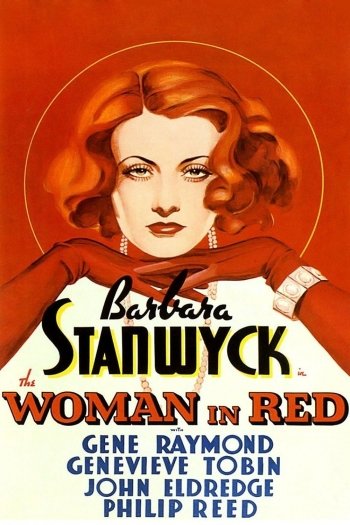 The Woman in Red

Info
Alpha Coders 1 Images
Interact with the Movie: Favorite I've watched this I own this Want to Watch Want to buy
Movie Info
Synopsis: Shelby Barrett (Barbara Stanwyck) rides show horses for wealthy widow "Nicko" Nicholas (Genevieve Tobin)and meets Johnny Wyatt (Gene Raymond), scion of a once-wealthy Long Island Family, but who now goes about the country riding polo ponies for "Nicko." Despite the efforts of "Nicko" and wealthy Gene Fairchild (John Eldredge), who is in love with Shelby, Johnny and Shelby are married. Shelby is treated frigidly by her snobby-but-broke in-laws, who frown even more when she and Johnny start handling the horses for wealthy neighbors on money Shelby had borrowed from Fairchild without telling her proud-but-broke husband. Matters aren't helped any when "Nicko" shows up and starts a gossip circuit directed against Shelby. When Johnny is away, Fairchild asks Shelby to help him entertain a wealthy client aboard his yacht. She tries to contact Johnny and fails but accepts the invitation...