Movie Abyss Island of the Doomed 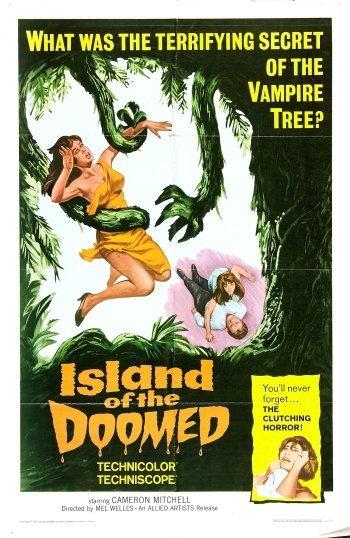 Island of the Doomed

Info
1 Images
Interact with the Movie: Favorite I've watched this I own this Want to Watch Want to buy
Movie Info
Synopsis: We take six diverse people--an unhappy married couple with a younger wife, a scientist, an older eccentric lady who is voiced in a Fran Drescher manner, a heroic young man (George Martin), and a desirable young woman for him to be interested in--who choose to vacation at the estate of a Count who is engaged in odd scientific research, and watch them deal with the gradual sense of doom...and the gradually more aggressive killer plants developed by Cameron Mitchell. The film is well-paced, and it leads to an exciting climax. MANEATER OF HYDRA/ISLAND OF THE DOOMED must have looked great on a massive drive-in screen back in 1967--it's still worth seeing today for the fan of 60's Euro-horror and for fans of the great Cameron Mitchell.


Tagline: What Was the Terrifying Secret of the Vampire Tree?