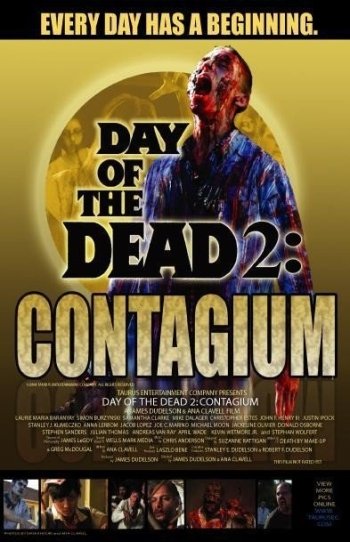 Day of the Dead 2: Contagium

Info
1 Images
Interact with the Movie: Favorite I've watched this I own this Want to Watch Want to buy
Movie Info
Synopsis: In 1968, in the Ravenside Military Hospital in a military facility in Pennsylvania, the army loses control of an experiment of a lethal bacteriologic weapon that changes the DNA and transforms human beings into zombies. A group of soldiers is sent to the hospital to eliminate the infected staff and interns but private DeLuca steals a test tube with the virus and hides it inside a vacuum flask. He is transformed into a zombie and killed but the vacuum flask falls in the grass. In the present days, a group of patients in the mental institution Ravenside Memorial Hospital finds the vacuum flask and later when one of them opens the vessel, the culture tube drops on the floor of a bathroom contaminating the group and their Dr. Donwynn

View the Full Cast of Day of the Dead 2: Contagium

Bereavement
Creature With the Atom Brain