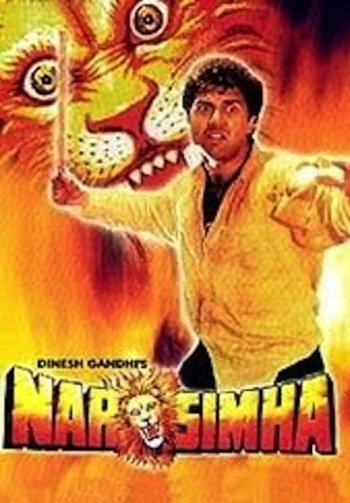 Info
1 Images
Interact with the Movie: Favorite I've watched this I own this Want to Watch Want to buy
Movie Info
Synopsis: Narasimha a young and captive man lives a middle class life with his family in a quite neighbour hood. He gets his beautiful sister marry to an eligible young man in there vicinity. On the occasion of his sister giving birth, he returns home to find that a conflict arise between his neighbour hood and another neighbour hood where he seek refuge in a dwelling area nearby only to return and find out that his whole family has been murder. Without no aim left in life Narasimha decided to turn to crime and alcohol. He later decided to work for a man call Suraj Narayan Singh. But when Suraj asks him to kill Ravi Rastogi for falling in love with his daughter, Meenu. Narasimha refuses, and on the contrary joins forces with Ravi, his sister, Anita, to force Suraj to get the young couple married. This kind of conflict escalates to such proportions that Suraj finally gets arrested and lodged in a cell.