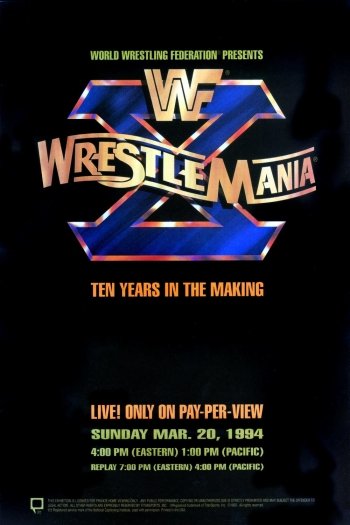 Info
Alpha Coders 1 Images
Interact with the Movie: Favorite I've watched this I own this Want to Watch Want to buy
Movie Info
Synopsis: WrestleMania X was the tenth annual WrestleMania. It took place at Madison Square Garden in New York, NY on March 20, 1994. The central focus of the pay-per-view was the WWF Championship, which was defended in two matches. Lex Luger challenged champion Yokozuna first but saw Luger disqualified for pushing the referee. Bret Hart faced Yokozuna later in the evening and won the championship by pinning Yokozuna. This led to a lengthy feud between Bret and his brother Owen, who defeated Bret in the opening match of the PPV. Razor Ramon defeated Shawn Michaels in a Ladder match to resolve an angle in which the two had argued over the rightful holder of the Intercontinental Championship. Bam Bam Bigelow gained revenge against Doink the Clown, with whom he had been feuding, by teaming with Luna Vachon to defeat Doink and his partner Dink. Randy Savage also settled his feud with Crush by defeating him in a Falls Count Anywhere match.


Tagline: 10 years in the Making