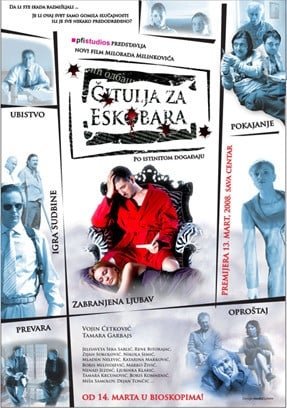 Info
1 Images
Interact with the Movie: Favorite I've watched this I own this Want to Watch Want to buy
Movie Info
Synopsis: Serbian crime drama focusing on Belgrade's violent criminal underworld. Obituary For Escobar distinguishes itself from other recent crime dramas with its strong visual style and energetic approach. Borko was a young effeminate boy bullied at school by the self-styled 'Ghandi'. Years on, Ghandi is now a warlord, wrecking mayhem in pursuit of his ambition to become the leading drug lord in the Balkans. His execution of the rival 'Serbian Escobar' coincides with the mysterious placement of an obituary for the real Escobar by two stoners. In Ghandi's pursuit of the assailants he meets Lela, a stunning mystery woman who leads Ghandi to reconsider both "Borko" and his life in crime.

View the Full Cast of Obituary for Escobar