Movie Abyss Thank You for Smoking

Info
Alpha Coders 1 Wallpapers 1 Images
Interact with the Movie: Favorite I've watched this I own this Want to Watch Want to buy
Movie Info
Synopsis: Nick Naylor is a charismatic spin-doctor for Big Tobacco who'll fight to protect America's right to smoke -- even if it kills him -- while still remaining a role model for his 12-year old son. When he incurs the wrath of a senator bent on snuffing out cigarettes, Nick's powers of "filtering the truth" will be put to the test.


Tagline: Tobacco lobbyist Nick Naylor is trying to SAVE YOUR ASH!

Recent Thank You for Smoking Wallpapers 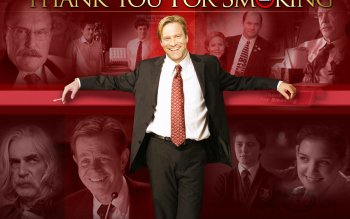 Blue in the Face
Smoke

Zero for Conduct
Divers in the Rain
The Bank