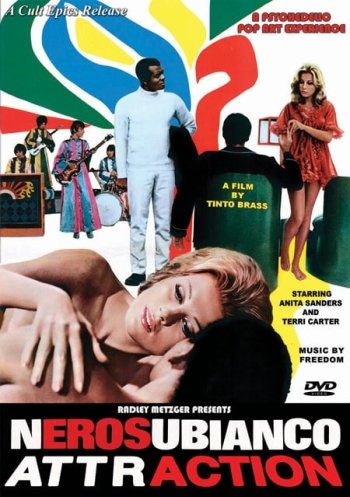 Info
Alpha Coders 1 Images
Interact with the Movie: Favorite I've watched this I own this Want to Watch Want to buy
Movie Info
Synopsis: One of the great taboo-smashers of the late '60s, directed by Tinto Brass, featuring interracial affairs, anti-Vietnam statements, violence versus sex. ATTRACTION (NEROSUBIANCO) will stun anyone expecting a standard softcore European sex flick as released originally in the US thru Radley Metzger's Audubon Films under the title THE ARTFUL PENETRATION OF BARBARA, then brace yourself for a whirlwind trip with a married woman (Anita Sanders) whose journey through the psychedelic English youth scene awakens her to the carnal offerings of an African-American man (Terry Carter), all set to by a searing soundtrack by FREEDOM, a tripped-out group formed from the remnants of PROCAL HARUM. Nearly plotless and often improvised, this undiscovered cult film distinctive tone and editing scheme anticipated everything in the following year releases of Nicolas Roeg PERFORMANCE, Kubrick's A CLOCKWORK ORANGE to our current post-MTV mindsets.


Tagline: A motion picture for the stoned age.