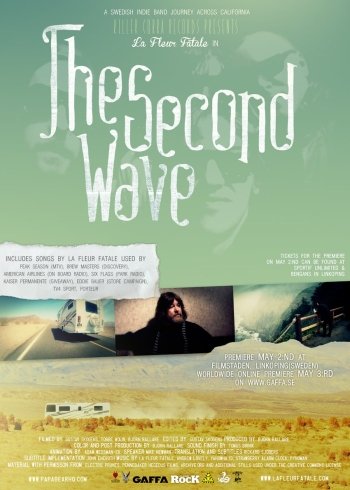 Info
1 Images
Interact with the Movie: Favorite I've watched this I own this Want to Watch Want to buy
Movie Info
Synopsis: Spring 2012 the Swedish band La Fleur Fatale embarked on a journey to and through California. During two weeks they played with legendary psych musicians and met people who was part of making the 60's into what it later became both musically and spiritually, connecting the past with the present both musically and politically. What is the difference between then and now? Is the Anonymous movement now what 60's anti war movement was back then? The band themselves only knew about the shows they are supposed to play on the trip through California, they are lead on the journey by their manager that call in the next destination. In The Second Wave we find people and bands like La Fleur Fatale of course, Ebbot Lundberg (TSOOL), Strawberry Alarm Clock, James Lowe(Electric Prunes), Duncan Faure(Bay City Rollers, Rabbit), Patrick Campbell-Lyons (Original Nirvana) and more. The people behind this documentary have been working pro bono, by love to the band and the project itself.

Moving McAllister
Maharajah of the Road