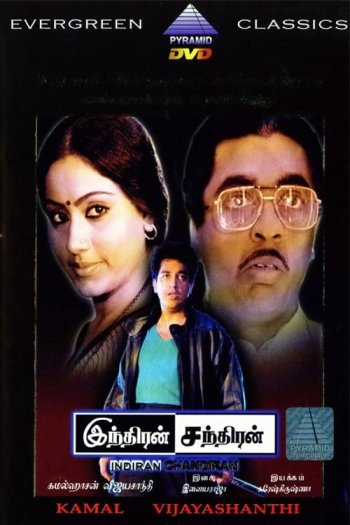 Info
1 Images
Interact with the Movie: Favorite I've watched this I own this Want to Watch Want to buy
Movie Info
Synopsis: Indiran Chandiran has Kamal Haasan in a dual role. The story revolves around the corrupt city mayor G.K. Raju (Kamal Haasan) whose atrocities have no end.His assistant Kripakar (Charanraj) kills the mayor and plants a decoy, Chandiran (Kamal Haasan again), in order to find a stash of expensive diamonds hidden away by the mayor. Durga, a journalist, falls in love with Chandiran. They both join hands to bring the murder of the mayor to light. After many a hilarious twist and turn of events, the duo finally brings the culprits to book.

Your Happiness Depends on Me