Movie Abyss They Raid by Night 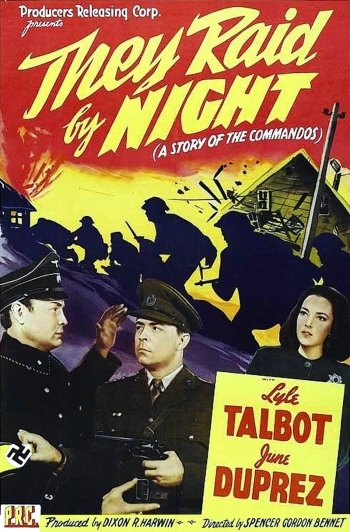 They Raid by Night

Info
1 Images
Interact with the Movie: Favorite I've watched this I own this Want to Watch Want to buy
Movie Info
Synopsis: The British Commandos send Bob Owen (Lyle Talbot) to Norway to prepare for a raid. His mission also includes freeing General Heden (Paul Baratoff) who is being held by the Nazis. His aides include Eric Falken (George Nesie) and Harry (Charles Rogers). Inga (June Duprez), a Norwegian girl to whom Falken was once engaged but who has become the sweetheart of Oberst Von Ritter (Victor Varconi), betrays their hiding place. The three overpower the Gestapo men sent after them, take their uniforms and enter the prison camp and free Heden. The four men then start for the coast to meet the Commando expedition. Inga, who the men still trust, again informs von Ritter and Falken is captured but Bob and Harry escape with the aid of Dalberg, who they thought was a Quisling stooge.