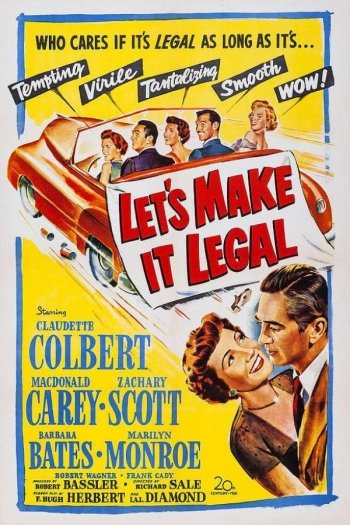 Info
Alpha Coders 1 Images
Interact with the Movie: Favorite I've watched this I own this Want to Watch Want to buy
Movie Info
Synopsis: The divorce of Hugh and Miriam Halsworth becomes final at midnight. Hugh wouldn't dream of calling it off, but can't abandon his rose garden. Things change that afternoon, though, when Miriam's old suitor Victor Macfarland checks into the hotel where Hugh is publicity man. With Miriam's daughter Barbara rooting for Hugh and son-in-law Jerry rooting for Victor, things are unlikely to be resolved by midnight...


Tagline: WHO CARES IF IT'S LEGAL AS LONG AS IT'S Tempting Virile Tantalizing Smooth WOW!

View the Full Cast of Let's Make It Legal