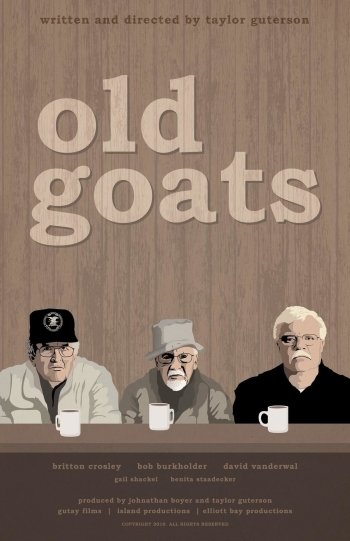 Info
1 Images
Interact with the Movie: Favorite I've watched this I own this Want to Watch Want to buy
Movie Info
Synopsis: Old Goats is a gentle comedy about the indignities of aging. Meeting at a weekly coffee klatch for the local over-70 set (no girls allowed!), three "old goats" from different social strata develop an unlikely friendship. One's a married, golf-playing, sports-car-driving businessman recently forced into retirement. Another is a salty octogenarian World War II vet and (still) devoted womanizer. The third is a shy bachelor car mechanic, just fired, who lives on a squalid sailboat . Theirs is the common tragedy of losing one's vocation, one's purpose in life. There's talk of sailing adventures, online dating, and a condo in Palm Springs, but these three live in common terror of the question, "What's next for you?" They know damn well what's next! And they're determined to avoid it for as long as possible.