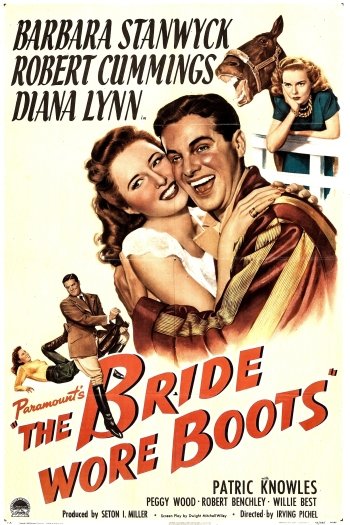 Info
4 Images
Interact with the Movie: Favorite I've watched this I own this Want to Watch Want to buy
Movie Info
Synopsis: Rich and beautiful Southern heiress Sally Warren loves horse-racing and running her horse-farm although her husband of seven years hates the four-legged mammals. Spouse Jeff Warren is a successful author, Civil War scholar, and popular lecturer on the ladies club circuit. After Jeff buys aging twelve-year old nag Albert in the mistaken belief that he's a colt and Sally purchases a desk for her husband in the naive belief that it once belonged to Jefferson Davis, it's obvious that they have few interests in common. The squabbling is complicated by Jeff's jealousy of Sally's relationship with Lance Gale, her childhood friend, neighbor, and fellow horse breeder.


Tagline: Marriage At Its Raciest!

View the Full Cast of The Bride Wore Boots