Movie Abyss Looking for His Murderer 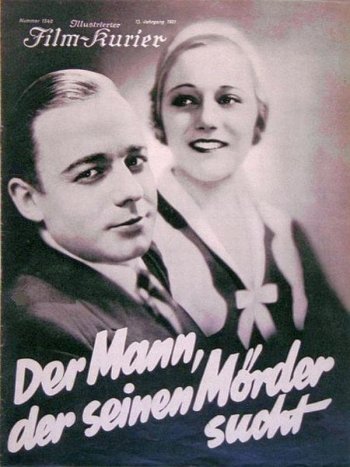 Looking for His Murderer

Info
Alpha Coders 1 Images
Interact with the Movie: Favorite I've watched this I own this Want to Watch Want to buy
Movie Info
Synopsis: Robert Siodmak's second solo directorial effort was the breathless comedy-melodrama Der Mann, Der Seinen Moerder Sucht (Looking For His Murderer) In the face of ever-mounting debts, Heinz Ruhmann arranges for his own murder to be committed within the next 12 hours. During this period, Ruhmann falls in love and gains a whole new lease on life. Frantically, he seeks out the man whom he has hired to bump him off -- only to find out that the latter has sold his "contract" to another fellow -- who in turn has sold it to a third party. Eventually, the whole mess is wrapped up with a Keystone-like car chase. Famed composer Friedrich Hollander shows up in a minor role, complete with patently phony mustache. ~ Hal Erickson, Rovi