Movie Abyss I Am an S+M Writer 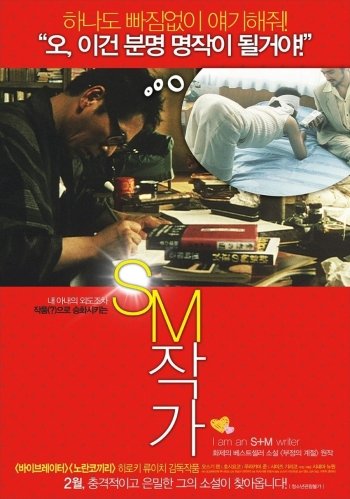 I Am an S+M Writer

Info
1 Images
Interact with the Movie: Favorite I've watched this I own this Want to Watch Want to buy
Movie Info
Synopsis: Kurosaki (Ren Osugi) is an erotic novelist who uses his editor and a hired model to act out scenarios in his living room he will use for inspiration in his writing. His wife Shizuko (Yôko Hoshi) calls him a pervert but we soon learn that what bothers her is that she feels her husband has intellectualized his carnal desires and she feels physically neglected. Shizuko tries to make him jealous, or simply goes after what she desires with someone else. At first she brings home a Caucasian English teacher but soon zeros in on her husband's editor after witnessing his accomplished S&M rope tying technique. Kurosaki's first response is anger, then forgiveness, then he decides to use the affair as inspiration for his current work in progress. He demands that his editor continue the affair and recount all the sordid details to him. He slaps his editor upside the head, then forgives him and offers him a drink each time before they get to work.