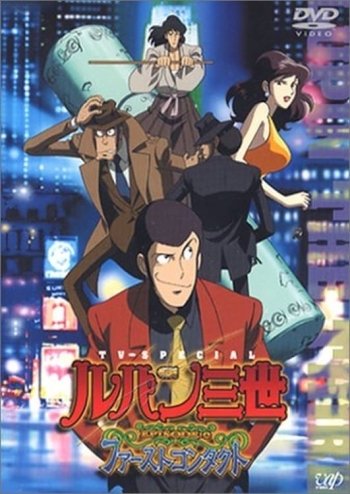 Info
Alpha Coders 1 Images
Interact with the Movie: Favorite I've watched this I own this Want to Watch Want to buy
Movie Info
Synopsis: A reporter asks Jigen to tell how he met Lupin and the rest of the gang. He tells of when he was hired by a millionaire named Galvez to help guard the Clam of Helmeth, a green cylinder made of unbreakable metal. The cylinder contained instructions on how to forge a metal similar to the one that composed it. The Clam has also gained the attentions of Lupin, a fellow thief named Brad, and Brad's partner, Fujiko. Brad manages to steal the Clam, but is murdered by Galvez' henchman, Shade. Lupin and Fujiko now have possession of it, but no means to open it. Meanwhile, Inspector Zenigata has been dispatched by the Japanese police to hunt down and arrest Fujiko. He is paired with George McFly, an American detective who is his only resource. And on the other side of the world, Goemon is seeking a sword worthy of his skills. The key to opening the Clam of Helmeth is now the focus of everyone's efforts, but who will come across it first?