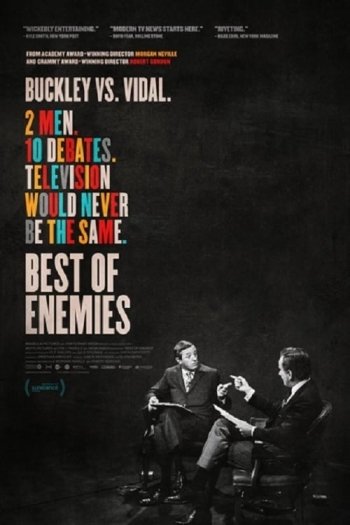 Info
Alpha Coders 1 Images
Interact with the Movie: Favorite I've watched this I own this Want to Watch Want to buy
Movie Info
Synopsis: A documentary about the legendary series of nationally televised debates in 1968 between two great public intellectuals, the liberal Gore Vidal and the conservative William F. Buckley Jr. Intended as commentary on the issues of their day, these vitriolic and explosive encounters came to define the modern era of public discourse in the media, marking the big bang moment of our contemporary media landscape when spectacle trumped content and argument replaced substance. Best of Enemies delves into the entangled biographies of these two great thinkers, and luxuriates in the language and the theater of their debates, begging the question, "What has television done to the way we discuss politics in our democracy today?"


Tagline: Buckley vs. Vidal. 2 Men. 10 Debates. Television Would Never Be the Same.