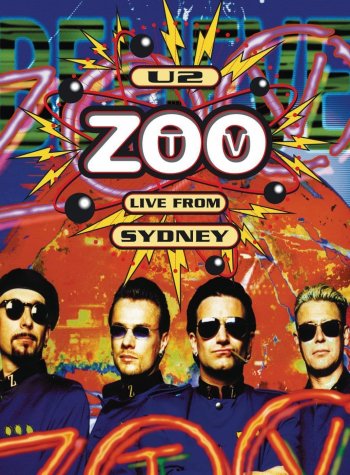 Info
1 Images
Interact with the Movie: Favorite I've watched this I own this Want to Watch Want to buy
Movie Info
Synopsis: 1. Show Opening 2. Zoo Station 3. The Fly 4. Even Better Than The Real Thing 5. Mysterious Ways 6. One 7. Unchained Melody 8. Until The End Of The World 9. New Year's Day 10. Numb 11. Angel Of Harlem 12. Stay (Faraway, So Close!) 13. Satellite Of Love 14. Dirty Day 15. Bullet The Blue Sky 16. Running To Stand Still 17. Where The Streets Have No Name 18. Pride (In The Name Of Love) 19. Daddy's Gonna Pay For Your Crashed Car 20. Lemon 21. With Or Without You 22. Love Is Blindness 23. Can't Help Falling In Love U2 had been a major entity in the rock music world for many years by the time they released the ACHTUNG BABY album. Yet, it was this album that brought the band from popular rock act to multimedia force as their concerts began to include the video screen as an important part of the show. Following ACHTUNG BABY was the ZOOROPA album and one of U2's most successful tours, the Zoo TV Tour, in which the multimedia experience was expanded upon.